"Power concedes nothing without a demand. It never did, and it never will. Find out just what people will submit to, and you have found out the exact amount of injustice and wrong which will be imposed upon them..." Frederick Douglass

The [Black Bloc] Cancer in Occupy, by Chris Hedges

Apparently Chris' Harvard degree in divinity has failed him.

There are lots of problems here.

He uses the phrase Black Bloc movement. Black Bloc is a technique, not a movement, and one which is employed by a range of groups, not just anarchists.

There is a branch of anarchism, quite small, that employs property destruction as a strategy. These are called Insurrectionists, or 'Wreckies', and presumably some of their number do participate in Black Bloc actions.[1]

"Black Bloc adherents detest those of us on the organized left and seek, quite consciously, to take away our tools of empowerment."

Well it's good to hear that Chris sees himself as being on the left--it wasn't apparent.

First, Black Bloc events are organized. Does Hedges believe all those folks dressed alike showed up at the same place and time by accident?

Second, While it is no doubt true that BB events attract people who are not political and are just there for the mischief (besides the police, I mean), far from being an act of hatred directed at the organized left, they are undertaken by a section of the organized left. Again excepting the police who invariably don the balaclavas and masquerade as BBers, nobody is trying to disempower the left. This was a curious comment by Hedges indeed.

The real enemies, [BBers] argue, are not the corporate capitalists, but their collaborators among the unions, workers’ movements, radical intellectuals, environmental activists and populist movements such as the Zapatistas.

Hedges has lost his mind.

Again it must be remembered that it is not just anarchists who participate, and further I must say that I am not a Wrecky, and cannot and will not speak even for them specifically, nor the anarchist contingent within the BBs, be that as it may, to say that BBers and/or anarchists do not regard the corporate capitalists (not to mention real estate and finance capital) as the enemy is one of the most memorably stupid things I have ever read, and Hedges should be ashamed of himself. They are precisely whom anarchists regard as the enemy. And to the extent that the others he mentions "collaborate" with them then yes they too are the enemy. Although I don't know anybody who believes that unions, workers' movements, eco-activists, and radical intellectuals are necessarily collaborating with capital. In fact, these groups might be seen as the backbone of the resistance to capital.

Because Black Bloc anarchists do not believe in organization, indeed oppose all organized movements...

Here Hedges stoops to the tired old canard about anarchists not believing in organization. This isn't true and never has been. It is hierarchy and power to which anarchists object, not organization.

John Zerzan, one of the principal ideologues of the Black Bloc movement in the United States, defended “Industrial Society and Its Future,” the rambling manifesto by Theodore Kaczynski, known as the Unabomber, although he did not endorse Kaczynski’s bombings.

Zerzan is an Anarcho-primitivist, and there is an area of mutual concern and sensitivity between the two. I'm not a Prim, but Kaczynski's manifesto contained what I thought was a pretty good appraisal of industrial society and its shortcomings. While flawed, the manifesto is not without merit. When he leaves the analytical realm Kaczynski veers off into the pathological and what he says can be quite ugly, but I think it is inaccurate to dismiss his critique as worthless. It was facile of Hedges to use this against the Zerzan or the Black Bloc.

With regard to the Zapatistas, Hedges says the following:

In Zerzan’s now defunct magazine Green Anarchy (which survives as a website) he published an article by someone named “Venomous Butterfly” that excoriated the Zapatista Army for National Liberation (EZLN). The essay declared that “not only are those [the Zapatistas’] aims not anarchist; they are not even revolutionary.” It also denounced the indigenous movement for “nationalist language,” for asserting the right of people to “alter or modify their form of government” and for having the goals of “work, land, housing, health care, education, independence, freedom, democracy, justice and peace.” The movement, the article stated, was not worthy of support because it called for “nothing concrete that could not be provided by capitalism...“Of course,” the article went on, “the social struggles of exploited and oppressed people cannot be expected to conform to some abstract anarchist ideal. These struggles arise in particular situations, sparked by specific events. The question of revolutionary solidarity in these struggles is, therefore, the question of how to intervene in a way that is fitting with one’s aims, in a way that moves one’s revolutionary anarchist project forward."”

I think Venomous Butterfly's critique of the EZLN (which is not a pacifist organization, the type which Hedges favors) is a good one. I, and I think most anarchists, find inspiration in the Zapatista movement, but its similarity to anarchism goes only so far. There is a nationalist strain in their ideology, and it is entirely consistent with traditional anarchist belief not only to denounce it, but to not want to intervene in such a way which provides support for ideas which are inimical to anarchism. This is hardly a valid line of criticism for Hedges, but it's about to get worse:

Solidarity becomes the hijacking or destruction of competing movements, which is exactly what the Black Bloc contingents are attempting to do with the Occupy movement.

This is disgraceful. There has been no anarchist attempt to hijack either the Zapatista or the Occupy movement. We advance our ideas as do all the other ideological factions within Occupy. To suggest that anarchists have broken ranks with, or denied solidarity to, revolutionary, anti-capitalist movements with whom we have ideological differences is just an ugly lie.

Here Hedges brings in reinforcements to bolster his defamatory claims:

“The Black Bloc can say they are attacking cops, but what they are really doing is destroying the Occupy movement,” the writer and environmental activist Derrick Jensen told me when I reached him by phone in California. “If their real target actually was the cops and not the Occupy movement, the Black Bloc would make their actions completely separate from Occupy, instead of effectively using these others as a human shield. Their attacks on cops are simply a means to an end, which is to destroy a movement that doesn’t fit their ideological standard...I don’t have a problem with escalating tactics to some sort of militant resistance if it is appropriate morally, strategically and tactically,” Jensen continued. “This is true if one is going to pick up a sign, a rock or a gun. But you need to have thought it through. The Black Bloc spends more time attempting to destroy movements than they do attacking those in power. They hate the left more than they hate capitalists.”

Human shields! Hedges has a lot of nerve peaking of immorality. What happened to all that religious training? Even Trotsky never told lies like these about anarchists.

I could go on, but why bother, I'm sure you get the idea.

I no longer have any respect for Chris Hedges, and wonder as to what motivates him.

[1]There is a terrible history of anarchist terror and violence, which I wrote about here: http://www.countercurrents.org/fryett030411.htm
Posted by Dave Fryett at 7:58 PM

"The end of power-over, and the unleashing of power-to." John Holloway

THEY ONLY CALL IT CLASS WAR WHEN WE FIGHT BACK 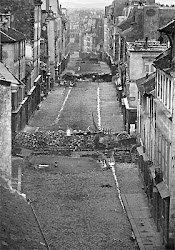 Got something to say?

Jim has been debunking government bunk for a long time. I was quite surprised when, after a relatively sparse correspondence, he asked me to be on his show. I was taken a bit unawares by his questions about anarchism, as he had suggested we talk about Ron Paul and this years litter of Republican presidential candidates. I wish I had done a better job fielding them. Nevertheless, it was a good conversation and I'm grateful to Jim for the opportunity. It was posted December 2nd, 2011, and can be found in the archives of Jim's blog. http://radiofetzer.blogspot.com/

Audio and video I recommend

That woman of international intrigue spills all of Wall Street's beans. Banks create inflation ( and hence the need for a COLA ) and the mysterious Smithy explains how the evil deed is done. All the broadcasts are interesting but the first deals specifically with what concerns us here.
http://www.radio4all.net/index.php/program/3550

If you want the whole sordid story, watch the Money Masters for a decidedly rightist interpretation:
http://video.google.com/videoplay?docid=-515319560256183936#